skip to main | skip to sidebar

Trip to the Vet's. 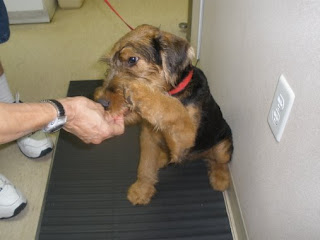 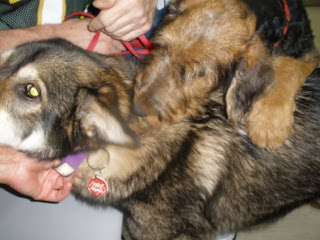 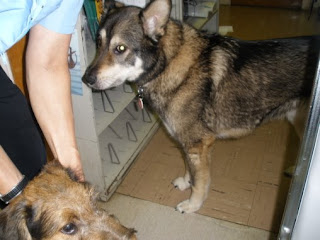 Always have to wait to see the vet. While I was waiting. This lady came in and was talking to the person behind the desk. I started barking at her to come over and pet me. Would you believe she still just kept on talking. I barked. Hey I am Falcon McLeod and very cute. Look over here at me. Then she turned and said: O I am sorry and came right over and gave me a big HUG.
Then I went and weighted in at 26 pounds. The vet asked me if I had met her dog? I told her no. So she went and came out with a big Husky named Dodger. He was very nice and let me play and follow him around the office. Had a good time at the vet's
Posted by Kodiak Grandson Falcon at 4:09 AM 6 comments:

Hanging out with granddad 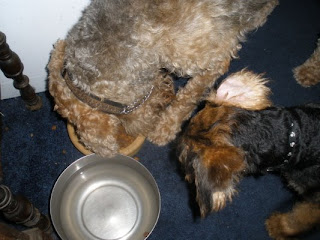 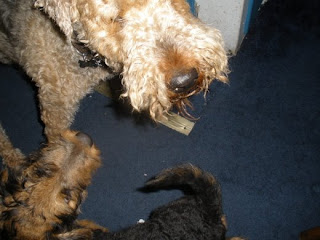 Kodiak and me just enjoying being together.
Posted by Kodiak Grandson Falcon at 1:52 PM 7 comments: 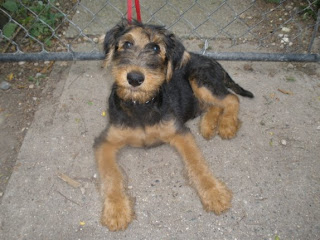 We were still on Skull Island. When the police asked us to investigate. Odd things going on with some humans that live on the island.
There was a Bokor (a voodoo priest who practices black magic.) They felt that he had something to do with it.
So the next night Falcon & Keri took food color and poured over themselves then painted a snake and skull on themselves. Keri had a little hat with a flower sticking out of the top of it. Falcon had a cap with a snake painted on it. They were ready to go.
Granddad wanted to go with them. He said: "I'm tough and can handle myself real well in a fight."
Falcon said: "Calm down. It's very important that you stay and know what we are doing in case we don't come back then you can send help.
Kodiak's eyes swelled up with tears and then he dug at the dirt a bit before he said: "Well you guys just better come back."
When they found the Bokor's camp. followers were all in a circle with there eyes watching a huge cobra with it's loose skin around it's neck form into a hood. It pitch dark and only the light from the torches shining on the altar where the cobra was, Then a FLASH of bright light and smoke. When the smoke cleared. There was the Bokor standing with a skull mask over his face.They were just in time to watch the preparation of the potent powder.
It is believed he has the power to control the living and the dead. But the control is really just a powerful poison.
Once the zombie poison is administered symptoms appear quickly and the victim slips into a coma. A doctor will find no heartbeat or breathing and muscles and skin become stiff and cold. The deceased is then prepared for burial.
A day or two later the Bokor goes in the cemetery and raises the victim by administering another potent mix drugs after being poisoned and buried alive the victim is so traumatized that very little persuasions is needed for them to become the Bokor's slave.
Falcon had seen enough. He now knows why some bank robbers have been caught and have no memory of who they are or what happened.
He turned to leave and bumped into the Bokor. He looked at him closely and then yelled " You are not one of us?"
His followers turned to attack and the race was on.
Falcon jumped on a horse and held his paw down and Keri got hold of it and was pulled on the back of the horse.
The horse ran like the wind but the Voodoo gang was faster. Just as the gang was all most on top of them. Falcon saw another crowd ahead of them and running straight towards them. Falcon though more voodoo followers. We are DOOMED.
Then Falcon took a second look and saw that the leader of the new group was Kodiak. He was running across the field. With him were all of our friends and police.

Kodiak Grandson Falcon
I love adventure. There is no beginning or end.. Yesterday is history. Tomorrow is a mystery. Today is a gift.